We are on the Right Track to COP 21 says France 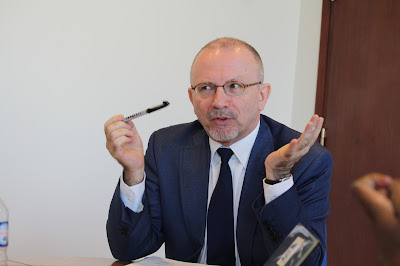 As the world temperatures rise risking food, water and energy security the world’s leading scientists converge in Paris, France from 7th to 10th of July for an international scientific conference ahead of the 21st Conference of Parties (COP21) of the UNFCCC, which will be hosted by France in December 2015.

The four-day conference dubbed ‘’Our Common Future under Climate Change’’  to be held at the UNESCO headquarters in Paris will sum up the results of the fifth assessment report of the Intergovernmental Panel on Climate Change (IPCC)  addressing key issues concerning global climate. It will also discuss solutions for both mitigation and adaptation while delivering a special road map to the COP21 negotiators.

Jean-Pierre Poncet, the second counselor for the permanent delegation of the French republic to UNESCO notes that urgent action needs to be taken to make an effort to reduce the global emissions and enable the human society to adapt to the new climate environment.

The UNESCO science summit will help shape the world future under climate change by identifying potential sustainable futures and innovations by designing and assessing relevant and consistent solutions, policies and measures, which will help increase the realisation of a binding agreement in Paris.

The 21st session of the conference of parties (COP21) which will bring together 196 countries will be a crucial conference, as it needs to achieve a new international agreement on the climate, applicable to all countries with the aim of keeping global warming below 2°C.

“We are aiming for an ambitious, universal and a legally binding agreement to enable us limit the planet average temperature rise to less that 1.5 to 2degrees above pre-industrial levels and scientific guidance on how to deal with existing disruptions” explains Poncet

Poncet notes achieving less than 1.5 to 2 degrees will be a daunting task considering that every country has its own diverse and specific situations depending on their geographical and financial situation, but adds that the agreement should be flexible taking into account those national circumstances.

He also pointed that despite the French government being on the right track, time is short and the pace of the negotiation must be steeped out.

“The Paris agreement must be built before the conference, we aim to tackle and resolve the largest number of issues” says Poncet “we are consulting with all concerned states to ensure they give a clear political direction and strong mandate to the negotiators” added Poncet.
\
Apart from working to ensure a clear political direction is given, the French government is also working together with the parties to ensure an agreeable solution is met on the sensitive climate financing for developing, least developed countries and small islands.

The French and the Peruvian governments have come up with an agenda of solution dubbed The Lima Paris Agenda, which hopes to do more, faster and now.

“By involving states, non-governmental organizations, civil societies, the media we are hoping to not only have an agreement on paper but concrete realizations to strengthen state commitment through cooperative initiatives” adds Poncet

According to Poncet, It’s important that scientists pave the way to the negotiators so that an appropriate decision is reached during the conference.

“It’s the responsibility of Journalists to explain the course and effects of climate change and in describing the actions in which countries, components and local communities do and can take to adapt to climate change” explains Poncet

Poncet called on Journalists to turn the global events into a local story that can reflect and capture the interest of the local communities.