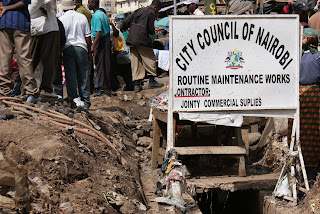 Suddenly the afternoon calm is torn by a sharp cry that sets the women upon a galloping villain. The cow had sneaked into one of the women’s stand and helped itself to mouthfuls of fresh tomatoes.

Cornered for its folly, it cleverly escapes to join a herd which is combing for leftovers at a nearby landfill.

But even here, the skinny animal has to muscle its way for a share of the rotting pile, with other herds of goats, camels, dogs and scavenging birds which circle the sky above menacingly.
Passersby chat away the charade with indifference. But a youth crouching by a nearby stream looks offended.

He is trying to scoop water from the stream to feed his shoe cleaning business at the nearby Githurai bus terminal, but hesitates. It has been covered by sludge flowing from the landfill above.

“It gets worse when it rains,” says Lucy Wanjiku, a trader at the open air market. “The Kiambu County Council charges us about Ksh. 30 every day but they do nothing about disposing the garbage. Sometimes the smell is unbearable.”

It is not the smell alone that is making Githurai residents edgy. Even as early as 7.00 a.m. in the morning, the calling of nesting birds is drowned by the hammering and sawing at the construction sites, as speeding boda bodas and women’s chatter complete Githurai’s noise mix.
As the days roll by, powerful wind gusts which weave mini cyclones into curls of dust are replaced by heavy rainfall. But even the downpour cannot wash away the black sludge which fills the open sewers all day.

This is the new reality facing residents living in fringe estates along the 50.4 kilometers long Thika superhighway. Hundreds of low and middle income tenants have flocked this end of Nairobi, due to the efficiency that the superhighway has brought with it.

“Whenever there is development of infrastructure it is bound to affect the population,” argues Dr. Leah Tsuma, the chief executive officer, Agency for Science and Technology Information Communication (ASTICOM). “When such an infrastructure is in place, avenues for people to move in and occupy certain sectors along that particular section open up.”

It is a possibility that was envisioned by the 2013 Nairobi - Thika Highway Improvement Project (NTHIP) report, which was conducting an environment assessment there.
According to the report by Professor Evaristus Irandu and Mr. John Malii of the University of Nairobi’s Department of Geography and Environmental Studies, the superhighway would encourage attractive trade and investment.

This is because of its link to Central, North Eastern, and parts of Eastern Kenya to Nairobi, as well as to neighboring Ethiopia and Somalia, argues the report which was conducted with help from the Center for Sustainable Urban Development at the Earth Institute, Columbia University.

And there is an enterprising spark to this growth. Demand for new housing units has attracted savvy tenants. Timber yards tower previously idle grounds. New state of the art entertainment joints are springing up.

Fast food joints offering 24 hours services are growing by numbers while middle income retail supermarkets have hastened to tap into the growing consumer pool. Even the banker has not missed the new money rush.

But the opportunities have paled the silver lining. For Thika super highway has brought with it serious environmental pressures than previously feared, according to investigations.

Uncollected garbage litters most of the trading centers along the highway. Repeated power blackouts are now an accepted way of life in most of the estates.

Even access to clean water has become a main source of conflict among frustrated residents, for a region that has more than seven flowing fresh water rivers.
Investigations reveal that NTHIP was placed as a category one project, or one that would cause adverse and irreversible environmental and social impacts, according to the African Development Bank (AfDB).
But this reality seems to have been ignored by authorities three years after the project was inaugurated.
“I used to have an arrow root plantation, which earned me good money,” moans Sammy Mwai, a farmer in lower Mwihoko. “But now I cannot grow anything because the water looks dirty.”

It is easy to understand Mwai’s frustration. Studies conducted by the Jomo Kenyatta University of Agriculture and Technology (JKUAT) biomechanical and environmental engineering department, show that pollution levels on surface water along the highway are worrying.

For instance, samples collected from river Kiu which cuts through Githurai indicates that it has a range of 3,000 to 9,000 milligrams per liter of Total Dissolved Solids (TDS).

The National Environment Authority (NEMA) allows water that has below 1,200 milligrams per liter of TDS for agriculture use.

It is not only loss of livelihood that is troubling peasants like Mwai. Field checks found out that residents from struggling estates are treated at least once every three months for water borne diseases. Hawking stalls trade more mosquitoe nets than fashion clothing.

The link between environmental pollution and human health is made clear by a recent report by the Rockfeller Foundation and Lancet Commission on Planetary Health.

According to the report, rapid economic development and urbanization is making cities in developing countries susceptible to health hazards from environmental changes. The Thika superhighway population sprawl in no exception.

“Pollution of the wetlands is as a result of solid and liquid waste dumping,” explains Asaah Ndambi, a researcher with the Institute of Livestock Research Institute (ILRI). “At least 3,200 tonnes of waste are produced in Nairobi every day.”

Although the NTHIP report recommended that trees should be re-planted at least 20 meters away from the carriageway once the project was inaugurated, the terrain is still bare in most of the spots.

Some residents complain of sleep loss due to the night glare and noise generated by speeding vehicles at night. Parents live on edge for fear that their children may stray into abandoned quarries.

“We are uniting the youth into groups that can participate in waste recycling along the highway,” explains an official with the Roysambu CDF office. “One of the projects that we have is recycling waste to make construction poles.”

Meanwhile, experts acknowledge that Kenya’s booming infrastructure growth is likely to put more pressure on the environment not only along the Thika superhighway, but all over the country.

“Countries like Kenya should follow development patterns that are not carbon heavy,” argues Alex Ezeh, Executive Director, African Population and Health Research Center (APHRC). “Development can drive change in a way that protects the environment.”